What Is The Difference Between Concrete And Cement?

What Is The Difference Between Concrete And Cement? 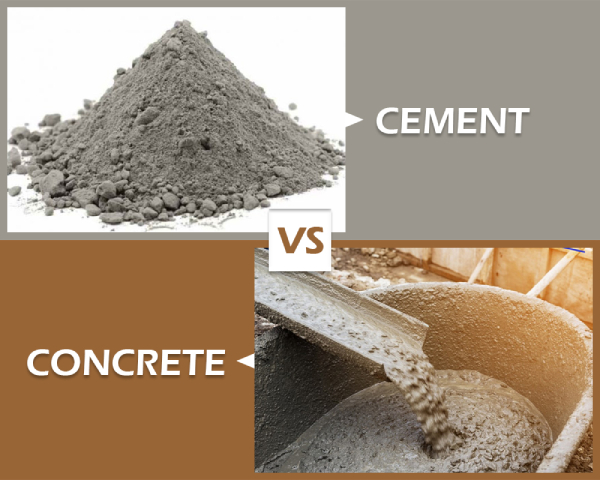 Many people seem to be confused about cement and concrete, after all, the terms cement and concrete often are used interchangeably. It’s rare for people to think much about the difference and similarities between materials since distinct materials have greatly recognizable differences. Even so, people generally do not know that cement is actually an ingredient of concrete.

For us to know the complete difference and similarities between the two, it is best to first learn the definition and uses of the two materials. In that case, what exactly is cement? What is cement made of? Cement is known to be a binding agent that can be used to stick various, several building materials together.

Portland cement, as well as asphalt cement, are some of the most widely known and most common types of cement in the construction industry. This Portland cement is actually one of the most important ingredients for concrete. It may be in either a dry powdery form before water is added or the paste that hardens and binds to whatever it’s touching.

This Portland cement is further made of a few primary substances, these substances used are limestone, sand or clay, bauxite, as well as iron ore. Furthermore, other substances may also include shells, chalk, marl, shale, slag, and slate. When all materials are gathered, these different pieces are then mixed and heated in cement processing plants. This would then form a rock-hard substance called clinker, this clinker will then be ground down to the powder that can be mixed with water to form a paste.

Although some may think that the more water added to the component, the stronger it would be, that thought is entirely wrong. In actuality, the less water that is added to a concrete mixture, the stronger that mixture will be. This may be since water is only used in concrete to activate the cement, which would then act as the binding agent.

Aside from that, the aggregates in the mix are also bound together by the cement. It would also be wise to remember that the mixes which use larger aggregates have a tendency to be stronger compared to those with finer aggregates. The mix would also need to be workable enough that it can be placed and consolidated properly. Although less water would make the concrete stronger, a too less and dry mix wouldn’t be able to get the concrete in place.

As mentioned several times already, although cement can be used alone, they are typically and primarily used as an ingredient in concrete. Although it is clear to see that cement has great adhesive properties, which also makes it an excellent binding agent when it is on its own, cement is prone and susceptible to cracking.

In terms of building material, concrete is highly more durable than cement. Concrete can last hundreds of years, meanwhile, cement is much less durable. Although cement can be used as a building material and is also used with concrete, it cannot perform as well as concrete when it comes to being building material.

Although it is like that, cement isn’t entirely useless as a building material since concrete works well in larger projects, cement, on the other hand, is more often used in smaller jobs. Since concrete is one of the strongest and longest-lasting materials known to man, it is used to build countless structures, such as schools, bridges, sidewalks, and many more.

Some amateur handymen may also use concrete for DIY projects of all kinds. Compared to that, cement is usually and mainly used in smaller jobs, including grouting and specialized masonry. Cement may also be used to repair cracked or crumbling concrete. If there are any needs for construction or repairs, don’t hesitate to give us a call or email.

Drop Us a Message